We Are Here To Support Coolnautics 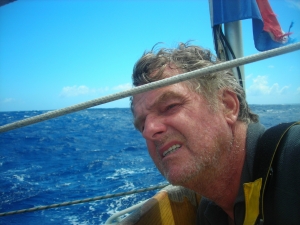 ‘ALL YOU HAVE TO DO IS CHOOSE AND KEEP GOING and that is what the crew of the Fearless Two has in mind.’

In 1978 Henk and his wife started a 7 year voyage round the world and their son Stefan (now a landscaper) was born on Easter Island in 1981. After this family voyage Henk became known worldwide for his solo circumnavigations with racing catamarans.

–1992 attempt with the ‘Zeeman’ specially built in Amsterdam for this race.

–2001 Henk started again, this time with a steel monohull called ‘Campina’ using a totally new route, instead of west to east or east to west, he wanted to sail the world north to south by passing the NE passage north of Siberia. This voyage took him three and a half years.

Nowadays Henk lives on an ocean-going, sail-assisted, motor vessel, writes books, gives speeches and shares his experience with the next generations.

Is it a coincidence that Bram, who is studying to become a landscaper, has Easter Island at the top of his places to visit for many years already?